Extracts from surviving editions of ‘Steelworks News’ 1976-1979 which superseded BWB News as Bilston Works’ newspaper – along with one cutting from local newspaper, The Express & Star, 1978, confirming the impending closure. 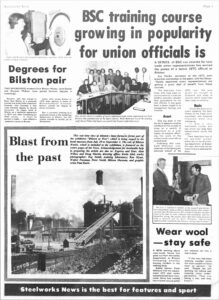 Highlighting training and an interesting photograph of the old blast furnaces which was part of an exhibition at the local museum on Bilston ‘at war’ between 1939 and 1945. 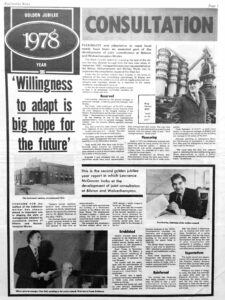 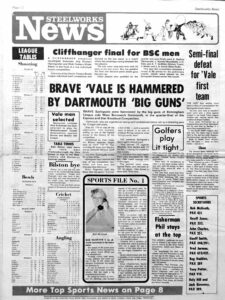 Here we have a host of familiar names as a reminder of those who participated in various sports activities. I spent many happy lunchtimes with sporting all-rounder Bob McGrath who also showed me who was boss on the bowling green…. 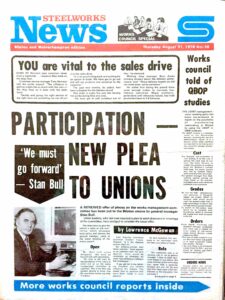 Front page plea from Stan Bull for involvement in Bilston’s future along with a message from my ex-boss Tony Harrison to the works council and an interesting idea for alternative steelmaking which sadly did not come to fruition. 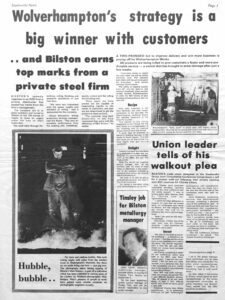 Highlighting Wolverhampton’s success in delivering the right bars on time to the right customers and plaudits to Bilston for supplying steel ingots in a hurry to a ‘private steelmaker’ no name provided – Round Oak perhaps ? One of Nick Hedges now famous photographs is also featured along with a move to Sheffield for John Carter. 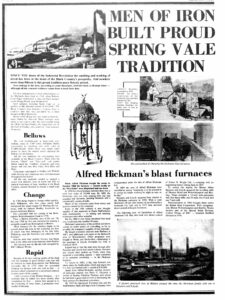 A very interesting history of ironmaking in the area. 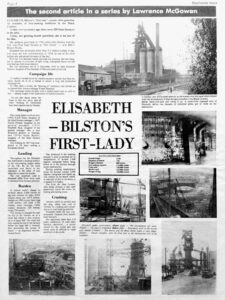 Great article following on from the previous page on ironmaking covering Elisabeth and her deserved pride of place at Bilston works. 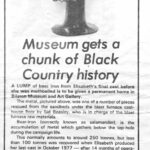 Interesting article on a donation of iron residue from beneath Elisabeth to the Bilston museum, thanks to Sid Beesley and Barry Hodgson. 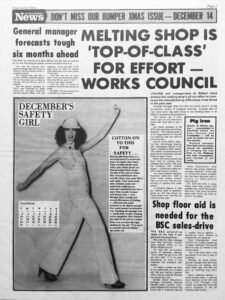 High praise for the melting shop but warnings of difficult times ahead along with an eye-catching model to promote safety awareness. 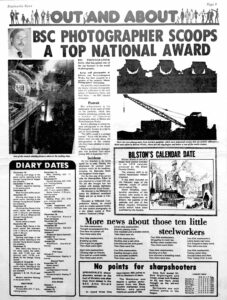 Features on works photographer Kevin Abel, a local calendar and a poem with a safety-at-work theme. 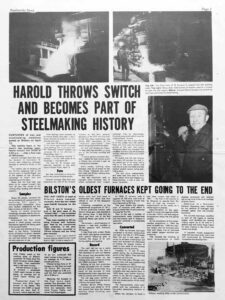 A very sad day for the melting shop and Bilston. I remember Harry Elwell and Ron Barnsley as those who would always take the time and trouble to explain things to me whenever I was on the landing; fitting that theirs was the last cast. Otherwise a very interesting page with history and facts concerning the melting shop and furnaces. 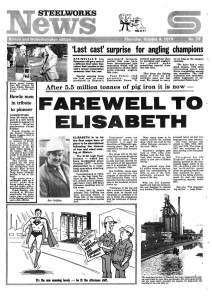 The sad announcement how Elisabeth, mothballed for the past two years was to be the first major part of the works to be demolished. Somehow the cartoon underneath just looks completely out of place. 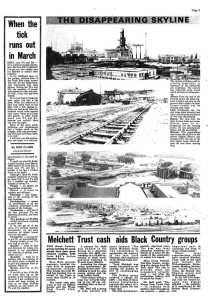 More information on what was happening and pictures of the changing landscape. 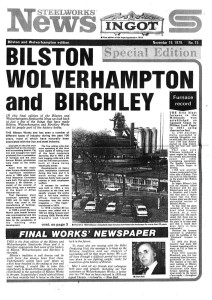 The last issue with words and pictures which speak for themselves. 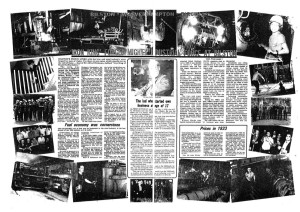 A warm reminiscence of the works, people and events over the years. 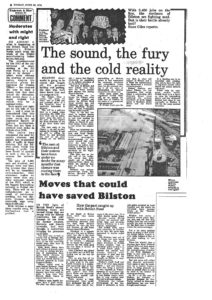 The only direct reference on this site to closure – an article detailing some of the reasons behind the demise of the works with comparisons to Shelton (which had already closed) and other plants which had been modernised such as Cooper Lloyd and Patent Shaft, deemed safe. Sadly, however, these also eventually faced closure.