Here are a number of pictures of Elisabeth and the Melting Shop taken by artist Harry Eccleston who was commissioned by Works Manager Bill Church in 1977 to capture Bilston works in etchings (see‘Artworks’) . In preparation for this work Harry took photographs of various parts of the works, some taken from unusual locations and angles, particularly of Elisabeth, to obtain the detail needed. 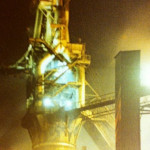 A wonderfully dramatic shot and clearly the reference for Elisabeth at Night. Harry has captured Elisabeth in all her glory, most likely flushing slag given the brightness and fumes issuing mainly from the from the nearside roof vents. A great picture. 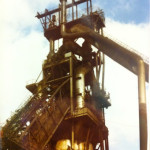 Elisabeth from the High-Line

A typical view looking up from High-Line. 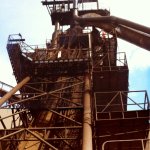 Great composite picture made up of two images to give a closer perspective of the skip hoist. Harry must have been given permission to ascend the hoist’s metal staircases since this is some way up from ground level. Access was strictly controlled.

A view closer to the furnace taken from one of the walkways on the hot blast stoves.

A more unusual angle looking closely towards the upper part of the furnace, giving good detail of the walkways and access gantry from the lift. 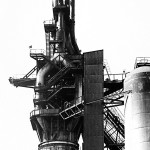 Similar view of Elisabeth from ground level showing the walkways, the lift shaft and access gantry. 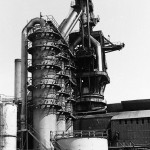 Good side view of Elisabeth, gas washers in the foreground. 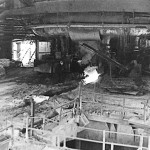 Clear view of the cast house where an oxygen lance, in the form of a thin metal tube held by the furnaceman, is being used to burn through the ‘skin’ of iron which always forms inside the taphole in order for the furnace to cast. The drill which will have just been used to remove the clay plug rests on the right at an angle. 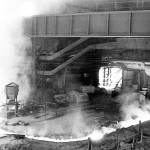 Iron is now running freely and channelled via gates towards spouts under which is a train of ladles lined up to receive the flow. 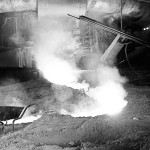 Closer image of the taphole area and the bright, dancing flow of hot metal…

Slag is now being skimmed from the surface of the iron and pours into slag ladles in a train on the opposite side to the iron.

A good shot of the slag pouring into the ladle. Note that the bogie on the right is full, that gate has been raised and the flow now runs below the lip of that spout and further along the runner to be diverted by the next gate into the adjacent ladle. 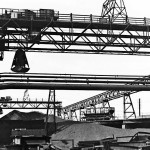 A view of the stockyard of iron ore for Elisabeth looking south-east, away from the works. The end wall of the block-like Blast Furnace Office with its flat roof can be seen on the left (below staircase). The railway ‘highline’ is visible on the right with a solitary coke truck; the blast furnace is some distance behind the cameraman.

Here is a selection of photographs taken in the melting shop, again Harry has taken these to use as references for his superb etchings. 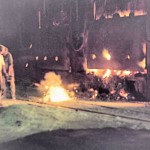 Furnacemen take a sample which is being poured into a small mould. When cooled, it will be placed in a container and sent to the met lab for check analysis via a pneumatic tube system. 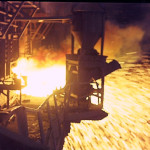 Dramatic picture of casting, sparks spray from the taphole, the ladle positioned underneath. The hopper and apparatus for making additions to the cast stands directly in front of the camera.

The ladle is now clearly visible in this picture, as is the launder for the stream of metal from the furnace. 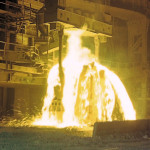 A terrific photograph of Ladle 12 with casting at full tilt, metal and slag overflows in all directions.

The ladle is now full and slag pours from the lip into the pit.

Harry switches to another furnace and now we see ladle 20…

Now reaching the end of the casting process, the ladle is almost ready for transferring to the teeming bay.

Now Harry has switched to black and white and here we see ladle 12 teeming ; already filled ingots can be seen with small tongues of flame playing around the top edges.

The mechanical apparatus for opening and closing the aperture underneath the ladle, called the ‘Stopper Rod’ (basically a plunger immersed in the molten steel) can be clearly seen. The operative is depressing the lever to keep it open. The arrangement of the ingots are also well depicted – four ingot moulds per railway bogie were served by a single ‘trumpet’ located in the centre. The ladle had to be carefully positioned above the relatively small opening of the trumpet and was an exercise in close co-operation between the First Hand Teemer and overhead crane operator.