The essential form of transport throughout the works was the railway system and here the introduction is best provided by ex-employee Roger Deans:

“Half of my working life was spent working on the locomotives in the loco maintenance shop – just one department of many in the steelworks that was part of a reasonably well oiled machine that without any of the others there would have been no production and no two and a half thousand jobs.
I saw the good times in the Sixties and early Seventies, the steady planned decline of the industry, I saw the heart torn out of Bilston when ‘Elisabeth’ was wiped from the skyline and the hopes of next generations went with it. I finally saw the desolation that is now another suburban housing estate. The steelworks will soon be forgotten, I hope these photographs and remembrances will keep part of the great steelworks in people’s minds.”

Here is ‘Elizabeth’ shortly after delivery from Yorkshire Engine Company in April 1953. Note the ‘S & L’ marked slag pot and steam locomotive in the background.

Pictured here is a group photo of workers with a freshly overhauled and painted ‘Margaret’ are as follows: standing left to right: Ivan Evans (mobile plant fitter), Bob Griffiths (Transport Manager), Ray Harris (Loco Shop Chargehand) and Roger Deans (Loco Fitter). Standing on the running plate : Bansel Singh (Loco Electrician), Colin Howell (Electrician),Trevor Monkton (Loco Fitter) and…unfortunately the name of the apprentice on the far right is not known. If anyone recognises then please get in touch using the Contact page. 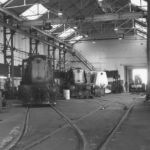 Taken around November 1977 we see three shunters at rest, the first two looking a little weary whilst the third, seemingly freshly overhauled, is ‘Andrew’. An Aveling-Barford shovel sits in the doorway.

This location, adjacent to the electrified LMR main line, is the where the works railway crosses the canal over a newly constructed bridge, the route being that from the blast furnace to the boat dock. Those identified are : standing on the locomotive (‘Philip’ – YE 2507) on the left of the picture wearing gloves is Shunter Sid Ives; standing on the ground in front of ‘Philip’ are (right-to-left) Frank Chaney, Rail Traffic Section Manager, Stan Redmond and Mick Tranter – Carpenter and Platelayer Supervisor. Any further names would be welcome.

In The Workshop I

This shows a freshly overhauled and repainted loco “Andrew” on No. 3 pit. Standing, left to right, on the floor are Noah Bradley (Driver) Giovanni Dana (Fitter) Micky Baker (Fitter) Sarat Singh (Apprentice) Penaser Singh (Serviceman). Squatting on the running plate are Trevor Monkton (Fitter) and Mick Hickman (Fitter) whilst lighting up a cigarette in the cab is Harold ?(Shunter).

This was a triple retirement: standing front row, far left side in jacket with arms folded is Mick Shaffrey, then moving centre left, with cap : George Elwell, next to him is Departmental Manager Ted Hailwood, then second retiree Joe Bratt and thirdly Bill Scrivens, retiring electrical foreman. At the far right end is Norman Owen. The gathering consisted of loco shop staff and engineers, electricians, machinists, plant fitters and apprentices. The usual retirement gifts were umbrellas. How times have changed ! Roger Deans relates an amusing story involving George and Joe:

‘Winter 1963. It had snowed heavily throughout the night and the harsh outlines and sounds of the steelworks were strangely clean and quiet. George Elwell and Joe Bratt, two old time charge hands in the Loco Repair Shop stood warming themselves in front of a radiator in the Loco Stores both having trudged through the cold and the snow to be there ready for an eight o’clock start. Both were enjoying their first ‘Park Drive’ cigarette of the day when outside two seagulls landed to feed on a couple of food scraps: “Ar bhat them say ducks Joe ? Them’s aytin the snow !” said George. Joe’s response ? “I wish they’d ate the bloody lot !” George nodded in silence while both carried on smoking as they did every morning….’ 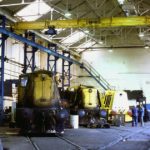 Taken at the same time as the black and white one above except we now have a nice conversation piece next to ‘Andrew’. Further information and comment now kindly provided by Roger Deans: “The man in the overalls & hard hat is Norman Owen (loco shop machinists charge hand ) I am not 100% sure who he is talking to – it may be Mick Shaffrey who was Assistant Manager of loco shop. Over to the left behind the benches is yours truly (talking again!). One point of interest in front of the loco on the middle pit is its roof section and leaning against it on the left side are two of the six pistons, these were seven inches in diameter and were removed and replaced through the side of the engine casing; this was a count your fingers before and after job…” 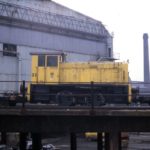 Here is a nice colour shot of shunter ‘Richard’ on the upper deck outside the Melting Shop. 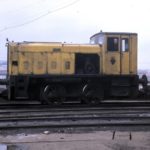 Another good colour image, this time of ‘James’ – unfortunately the driver is not identified.

A very interesting photo of ‘Yorkshire’ shunter YE 2507, “Philip”, on the highline looking unusually devoid of other traffic. Normally this area would be full of trucks unloading into the bunkers below however the parallel positions of the skips and lack of trucks on the highline would indicate that this was taken either during the annual shutdown or after Elisabeth had ceased working. On the middle right can be seen the sign for one bunker containing ‘Basic Slag’ – this would have come from the Melting Shop and was charged to Elisabeth to act as a flux but also contained traces of steel which could be recovered as iron through the blast furnace. Also visible at the far end are the windows of the first floor sales department in the lighter grey box-like extension of the general office. 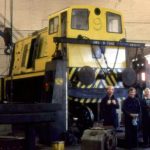 In The Workshop II

This shows Roger Deans (Foreman) Micky Petrovich (Fitter) and Vince Gwillim (Fitter) in front of loco “Andrew” (YE 2796) on the jacks over No 1 pit in the loco repair shop on 9th August 1980 having its traction motors removed and stripped. The casting in the foreground is the front motor gear box. 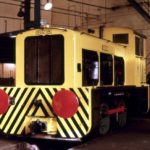 In The Workshop III

This shows a sparkling looking Ruston 165 DS ‘Richard’ after a complete overhaul on pit 1 and ready to go back to the melting shop landing (where the shiny paint job will quickly disappear!). The work on this lengthy overhaul started on 13th June 1977 and the engine was handed back on 14th December 1977.

On Works Duty I

An interesting shot of Series 1, YE 2505 “Coronation “ which shows the relative size compared to the locomotive of the 100 tonne ladles used to transport molten iron (hot metal) from the blast furnace to the melting shop. Location : standing adjacent to the Transport Radio Control building.

A good shot showing the melting shop in full production and locomotive ‘Andrew’in the harsh conditions of twenty four-hour working. Note the shield to protect the front of the loco from the intense heat given off from the freshly stripped ingots seen to the right of the track – and also the tight curves with which the locos had to cope. This image also clearly shows the distinctive red smoke from the open hearth furnaces, most noticeable when being charged with scrap – the melting phase. 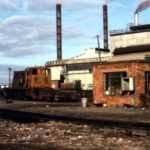 1968. This picture shows the approach to the Melting Shop landing with the Stewarts & Lloyds sign in the background. On the far left, over the main line, is the oil farm which was built in the early 1960s. The loco in view is a Yorkshire Series 1 with the Paxman Ricardo 275 hp engine. It could be one of three: YE2507 ‘Philip’, YE2508 ‘Charles’ or YE2508 ‘Anne-Elizabeth’. All were delivered in 1953.

This shows loco ‘Philip’ YE 2507 leaving the loco repair shop. Behind the engine can be seen the platelayers cabin & truck, behind which (the building with the aerial) is the loco radio control room. To the left is the heated dry sand hopper for the locomotives sand boxes. On the top right is the corner of the finishing end roof. 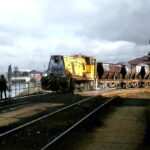 On The Highline II

Loco No. 7 ‘ALEXANDRA’ YE 2702 approaching the high line behind the blast furnace. The roof of the general office and the Millfields Road canal bridge can be seen behind. Note: the heat shield on the front of the engine was to protect it from the heat when pushing stripped ingots from the stripping bay.

End of the Line

Loco No.14 ‘EDWARD’ YE 2953 with, in the back ground No.4 ‘ANNE ELIZABETH’ YE2506 on the ramp leading to the melting shop landing. Note: ‘Edward’ was the final locomotive produced by the Yorkshire Engine Company of Sheffield, established in 1865, delivered to Bilston in 1965. 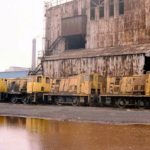 End of the Line II

Another poignant photograph to anyone who worked with or on the locomotives. It shows engines at the end of their working lives awaiting the burning torch parked behind the pig casting machine. Left to right ‘Sarah’ (YE 2706), ‘William’ (YE 2880), ‘Elizabeth’ (YE 2506) and ‘Anne Elizabeth’ (YE 2509). The chimney in the background is that of the skelp mill boilers. 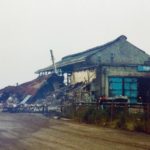 The end of an era. This sad image shows the partly demolished Transport Repair Shop in June 1981 following closure of the works.