South Staffordshire was an area where iron working, especialy the production of wrought iron and its products, was long established and very widespread. By 1880 for example the area’s wrought iron industry boasted 1,625 puddling furnaces and 311 rolling mills within 125 works. These were sourced largely from open top blast furnaces smelting local ores although in 1880 only 45 of the area’s 137 blast furnaces were in blast. Little wonder the district had become known as the Black Country.

Bilston grew up as an industrial complex, within which were several collieries blast furnaces and iron works (ie puddling and rolling plants). Alfred Hickman acquired Bilston Furnaces (blast furnaces) in about 1866 renaming them the Springvale Furnaces. in 1882 he promoted the formation of the Stafforshire Steel and Ingot Iron Co. Ltd. to manufacture steel by the basic* process. Second hand Bessemer equipment – three 12 ton (nominal) converters were obtained from the Mersey Steel and Iron Company of Liverpool and installed in 1886. P.C. Gillchrist was serving as a director of the Bilston business at about this time and it later traded under various titles which included the name of the founder.

In 1920 a controlling interest in Sir Alfred Hickman Ltd was obtained by Stewart and Lloyds Limited. Basic Bessemer steelmaking continued until 1925 after which all steel production at Bilston was carried out in open hearth furnaces.

It is relevant at this point to note that a significant secondary industry grew up following the coming of basic Bessemer steelmaking. Initially the phosphorus-rich basic slag from the process seemed to prove something of an embarrassment on Teesside and while some was shipped to Germany the remainder was simply dumped in the North Sea. Bilston however was more alive to the potential of this voluminous by-product and as early as 1886 announced its intention to install a slag griding mill. Crushed basic slag was soon being used as an artificial manure or fertilizer in agriculture where its slow release of phosphorous into the soil helped improve crop yields.

There is also an article on the history of the works under ‘Steel News’ / ‘Steelworks News’ section – see page entitled : ‘Men of Iron Built Proud Spring Vale Tradition’.

In 1973 Bilston Works was part of BSC’s Special Steels Division which was split into two groups: Forges, Foundries and Engineering and Steelworks. Bilston formed part of the Steelworks Group along with Brymbo, Panteg, Rotherham and Stocksbridge. Given Bilston’s capabilities in lower carbon, low alloy and leaded, free cutting, steels the works was deemed special enough to warrant being within the Special Steels rather than the ‘lesser’ General Steels Division. There was a subsequent reorganisation in 1976 and Bilston would finally be within what was called the Sheffield Division of BSC.

See below a street map showing the location of the works along with two diagrams showing the make up of the Special Steels Division. The first shows the geography of the division with the second (lower right) giving more details on the products from the various works themslves. 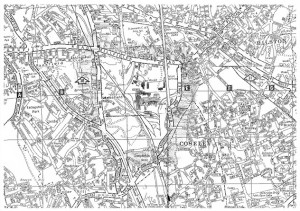 The area of the works is in the centre bounded by the Millfields Rd – Ladymoor Rd – Birmingham New Road triangle. 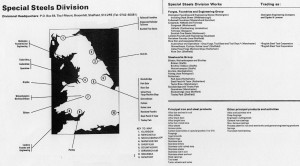 This plan shows the structure of the Special Steels Division, sub divided into Forges, Foundries and Engineering Group and Steelworks Group with Divisional HQ in Sheffield. 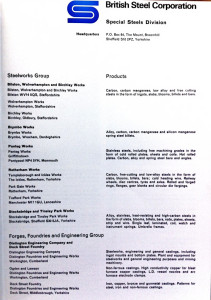 Another version of the organisational structure of the Special Steels Division circa 1972.