A selection of views taken mainly at or near the main entrance. They are undated but where possible an idea of when the photographs may have been taken is indicated.

The first Special Steels Division sign outside the main entrance – ‘A’ Gate, March 1970, freshly erected with stepladder still in place, scaffolding from the dismantled original BSC ‘Northern & Tubes Division’ sign lying in the foreground and up-lighting yet to be installed. See the next image taken from the back of this original photograph giving details….

Interesting information from the back of the photograph stating that this was the first BSC sign replacing the previous S&L one, erected on Sunday 29 March 1970.

A colour photograph of the main entrance in 1973. This connects to the next image (immediately to the right)

Adjacent to the main entrance, a rare colour photo of the original Special Steels Division sign. My memory was that it was white lettering on a blue background – but clearly I am mistaken since here it is in blue and white!

A still image from unidentified video/film footage showing the traffic of a shift change and, in the background, the new blue background Sheffield Division sign which replaced the white one of the Special Steels Division in 1975.

A black and white photograph of the Sheffield Division sign. 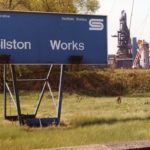 A colour photograph of the sign, this one sadly taken after closure, as the site was being demolished (note the wrecking cranes and Elisabeth’s partially dismantled cast house roof). 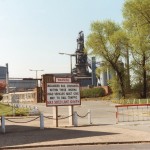 A nice colour photograph taken at the main entrance off the Millfields Rd. Given the absence of cars and the lowered barrier I would guess this was taken either during an annual shutdown or, more likely, very shortly after closure of the works.

The security office at the works main entrance.

A view taken from the Training Centre with the main road from A Gate entrance running from right to left in the foreground past the weighbridge. The low building where the cars are parked housed the Employment, Drawing and Work Study offices. Photo is undated but that Mark IV Cortina would put it sometime after September 1976.

Taken looking back towards the entrance shortly after construction of the Training Centre (early 1960’s). There is a distinct lack of vehicles however the bicycle shed looks full!

A closer look at the place where new employees would learn required skills. Roger Deans comments :“There were Apprentices and Works Operatives. Works Operatives were trained for semi skilled jobs in the works, whereas the Apprentices went on to hopefully become fully skilled and were indentured. Apprentices worked for lower wages although doing skilled jobs (many on day-release at college) whereas Works Operatives were on higher pay from the start. Operatives were usually on production and shifts within six months of starting, hence the difference in wages. Their short time in the Training Centre was spent mainly on Health and Safety whereas with apprentices it was mainly machine shop processes and bench work (the dreaded filing tests) as well as H&S and Iron & Steel Works processes.”

A nice overall view, probably taken at the same time as the Steel News feature in July 1976 ‘Bilston Drive for Top Quality’ (See ‘Steel News 1973-77). The Employment, Drawing and Work Study offices are in the foreground, the large dark brick building in the near background with the rectangular white stone edged windows is the General Office, the lighter more modern looking building in the distant background is the office of Tarmac plc. The land in the middle foreground, full of what looks like wooden sleepers, between the hedges and the fence is that of BSC engineering company E.N. Wright who had their own entrance a few yards adjacent to that of the works.

Taken at the same time as the preceding picture given the same cars in the same spots (being an Austin 1800, an Austin Allegro, a Ford Cortina Mk III and an Austin Maxi). Another nice image, again, with Elisabeth dominating the background. 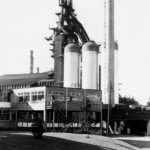 Here is a good shot of the flat roofed,two storey extension of the General Office. Starting left-to-right with the upper big windows, first two being in the sunlight…visible through the first is a glazed partition, the telex room being on the left side while the right was the Billet Sales order entry, next window and the first of three around the corner were billet home and export sales, with the view from the export desk being from just left of the first drainpipe (where I sat!). The left half of the middle window was billet sales whilst the right half was Bar Sales as of 1973. The final window on the right was that of the Buying Dept. Following the departure of Bar Sales to Wolverhampton Works in 1975 Billet Sales and Buying switched sides. Underneath was an open area outside the ground floor wages office for the workforce to gather and collect weekly cash pay-packets every Friday afternoon from ‘wicket’ windows. The patch of open ground just visible to the left was the end of a small car park overlooked by the buildings. Of course Elisabeth was always directly in view every day.

Signpost at junction a few hundred yards from ‘A’ Gate. On the left are the bicycle sheds and part of the’Polish Camp’ which housed Polish workers who could not return home after the war and included a chapel. Ahead on the right is the water treatment plant.

View From The Training Centre

Elisabeth is in clear view from the first floor windows of the Training Centre laboratory.

Here is a very good image showing a train of slag pots returning to the blast furnace area having been emptied at Tarmac. The train is passing the Blast Furnace Office on the left with the manager’s office on the corner – seemingly there is a visitor on his way! I worked in an office above and set back from the ground floor just out of shot. The trundling of those slag trains back and forth was a permanent daily background noise. The back corner of the melting shop is on the right of the picture.

A match being played at the sports club with the works as the backdrop, unfortunately undated.

Shutter depressed just as the batsman plays, fielders ready to pounce! The row of huts in the background were those of the ‘Polish Camp’ while the caravans parked against the fence housed temporary workers for Elisabeth’s reline which must date the picture around July/August 1976.

Here is the main gate for all lorries bringing scrap into the works for the melting shop with one of three scrapyards visible in the near distance. The vehicle in the foreground is one of the three-wheeled, fibreglass cars for invalids called ‘Invacars’ which had a motor-cycle engine, a tiller rather than a wheel for steering and were a common sight on the roads at the time. This one clearly belonged to the security guard at the gate. 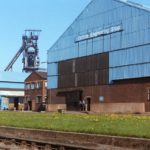 A very good view of the CES (and the top half of ‘Lizzie’) on a warm summer’s day; undated but again likely to be mid late 1970’s. The other blue building to the left is the Engineering Spares Stores known locally as the ‘Shell Plant’ from days during World War II for tube products destined to go into ammunition production. The two figures enjoying a warm break are unfortunately just a little too far away to be recognised.

Overall View from the South West

A very good view of both the melting shop and Elisabeth in the distance. Those characteristic ‘oxide bands’ on the chimneys can be clearly seen.