In this section you will find a number of pictures of Elisabeth taken at various dates. Some are clearly taken early in her time others later. Of particular interest are those taken when under construction prior to being blown in in 1954. NOTE : when you have clicked on an image it can be further enlarged by clicking again on the arrow box at the bottom r/h corner. To close the image simply click on it again.

Here is a classic, newly added image to open the section. This photograph was taken by artist Harry Eccleston when studying Elisabeth prior to creating his etchings of the works (see Artworks). In the foreground can be seen the three gas scrubbers with skip hoist and hot blast stove chimney in the background. More Eccleston pictures to come…

The furnace construction is well underway – foundations and outer shell plus topside landing appear complete. Note the scaffolding to the left which remained in place until after completion (picture on bottom right next to this) 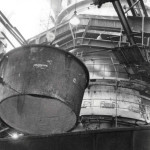 The enormous hopper for the double bell charging system is hoisted up through the partially completed cast house roof.

Further progress to the first image with seemingly most of the upper equipment and skip hoist in place.

A complete and seemingly freshly painted furnace deck area with tuyeres and pipework in situ. 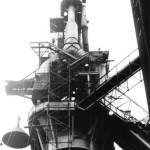 Here we see the large or second bell being lifted up for installation.

Elisabeth looks almost complete but the triangle of scaffolding is still in place along with the crane in front of the skip hoist. Note the brick chimney on the right for the old hot blast stoves, yet to be demolished.

A very clear image. On the left are the three hot blast stoves with the access lift tower between the stoves and the skip hoist. The large pipe from the top is the ‘downcomer’ carrying the carbon monoxide (CO) gas by-product into the dustcatcher. The gas went on to be washed (three towers on right) and electrostatic precipitated (in front of the washers) which cleaned the gas prior to being piped to the gas holder.

A very new looking Elisabeth. It looks as if the hot blast stoves are undergoing testing given the smoke from the chimney. It is unlikely that the furnace was operating at this point since workers are clearly visible on the catwalk which was prohibited when ‘on blast’. 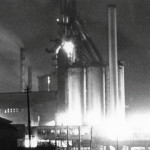 Elisabeth at Night I

A wonderfully dramatic picture similar in impact to the colour photograph further below. Elisabeth looks majestic here all lit up with plumes of smoke billowing from the melting shop chimneys in the background. Note the glow from the vents in the cast-house roof showing that casting was in progress. I wonder if the photographer waited – or was simply lucky to catch the moment.

Elisabeth as seen from the General Office Area

Another very good image which I first thought was a drawing but is in fact a photograph. In the foreground is the back of the staff and management canteen. On the opposite side at the front was a double door entrance which was divided left and right. The left side was for staff whilst on the right side was middle and senior management dining, all subsidised – and with waitress service for the management! 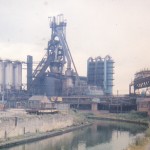 From the Canal I

Rare colour picture of Elisabeth taken late in a campaign given her exterior condition. Probably around 1975.

From the Tarmac “Road”

This was the view I believe from the road leading to the Tarmac slag tipping area. The Blast Furnace office was some way to the left and the line ran in front of the office.

From above the High Line

A well composed picture of Elisabeth and I seem to recall seeing the original around the Blast Furnace office. Apologies for the quality – I will work on it. Probably taken in the mid 1950’s given the type of railway wagons in view. 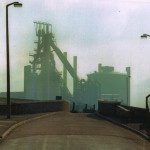 From the Ward St. Bridge

Running south to the Millfields Rd was Ward St (see A-Z map under Bilston Works) which had a narrow hump-back bridge. This is a great telephoto picture looking over ‘the hump’. 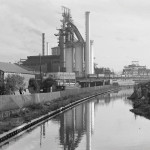 From the Millfields Rd Bridge I

A very nice and sharp image by William Parker of Elisabeth again probably mid 1970’s. The silver paint towards the top of the hot blast stoves has blistered, domes and gas offtake pipes are very dirty. Here we can also see, visible behind Elisabeth, the chimney of ‘G’ furnace exhibiting the “square” patches of weathering discoloration at the seams – however – ‘H’ furnace’s chimney looks freshly painted silver so this picture would, at first glance, appear to have been taken during a summer shutdown when all chimneys were repainted but clearly the furnaces are operating so it is a little odd. Perhaps it is a trick of the light. The plume of steam from Elisabeth certainly reveals that she is “off blast”.

From the Millfields Rd Bridge II

At first glance this looks an identical photograph to the adjacent image – which in general it is – but detail differences reveal it is a different shot. The photographer’s position on the bridge is more to the left, there is no smoke from the Melting Shop chimney, or Elisabeth’s top vent. Otherwise it looks to have been taken more or less around the same period given the appearance of the blast furnace however there seems to be less undergrowth running along the fence line next to the tow path. Another very nice photograph.

From the Millfields Rd Bridge III

Now we have a colour photograph taken by Gerald Hanrahan of the Wolverhampton Photographic Society, undated but likely to be in 1980 since this is clearly and unfortunately after closure of the works: the roof of the blast furnace cast house is missing (only the supporting girder is visible) as is the gas holder which can be clearly seen in the adjacent images. 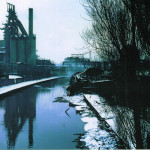 From the Millfields Rd Bridge IV

Another picture taken from almost the exact same location on what is clearly cold winter’s day but obviously some years previously since the works is in operation and judging by the wet appearance of the stove-tops Elisabeth would seem to be “on blast”. 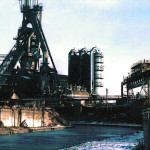 From the Canal II

Looking a similar day to the adjacent picture – cold and in snow – a good view of Elisabeth from the entrance to a short tunnel the canal passes through behind the photographer. 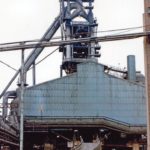 A good image showing the open end of the cast house and ramp for access by vehicles. Notice the ‘No Entry’ sign which flashed when the furnace was casting. (See also the larger, similar picture below) 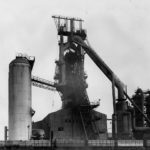 From the Canal III

A clear view of the skip hoist and downcomer into the dustcatcher and gas washing towers. It seems that the small bell has recently discharged it’s first load onto the large bell as a faint haze of smoke is visible. When the large bell lowers, a cloud of smoke is trapped between the bells so when the first bell next lowers the first of several more skips, the smoke is then released. 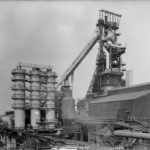 This picture looks as if it was taken shortly after Elisabeth was blown-in and looks brand new. By the fumes billowing from the cast house she looks to be casting. 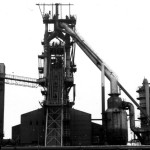 From the Canal IV

Elisabeth is off blast while work on the hot blast stoves is being undertaken. 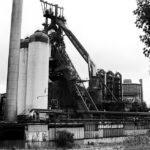 From the Canal V

One of three pictures taken in 1978, sadly after Elisabeth had been blown out now looking somewhat neglected. 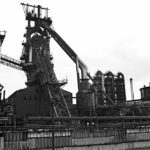 From the Canal VI

A good image but, again, sadly taken after the furnace had been shutdown

A good photograph taken from the road to the General Offices. Elisabeth is looking tired and my guess is that this was probably taken after she had been shutdown, post September 1977. 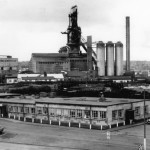 From the Training Centre Roof

See also the section ‘General Views of the Works’ for other pictures taken from this location dated around 1976. 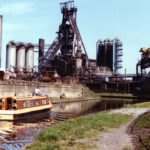 Here we see narrow boat ‘Finmere’ gently motoring along the Old Main Line canal. Judging by the appearance of the crew it looks warm – possibly taken during the heat wave of 1976. Compare perhaps to the snow on the ground in a previous similar view… 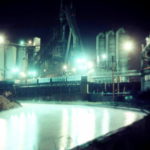 An excellent photograph taken from a similar location but this time at night on a time exposure. The quality is not ideal, being perhaps a little over exposed but, no matter, it captures the atmosphere perfectly. Compares well with Harry Eccleston’s photograph in the next section. 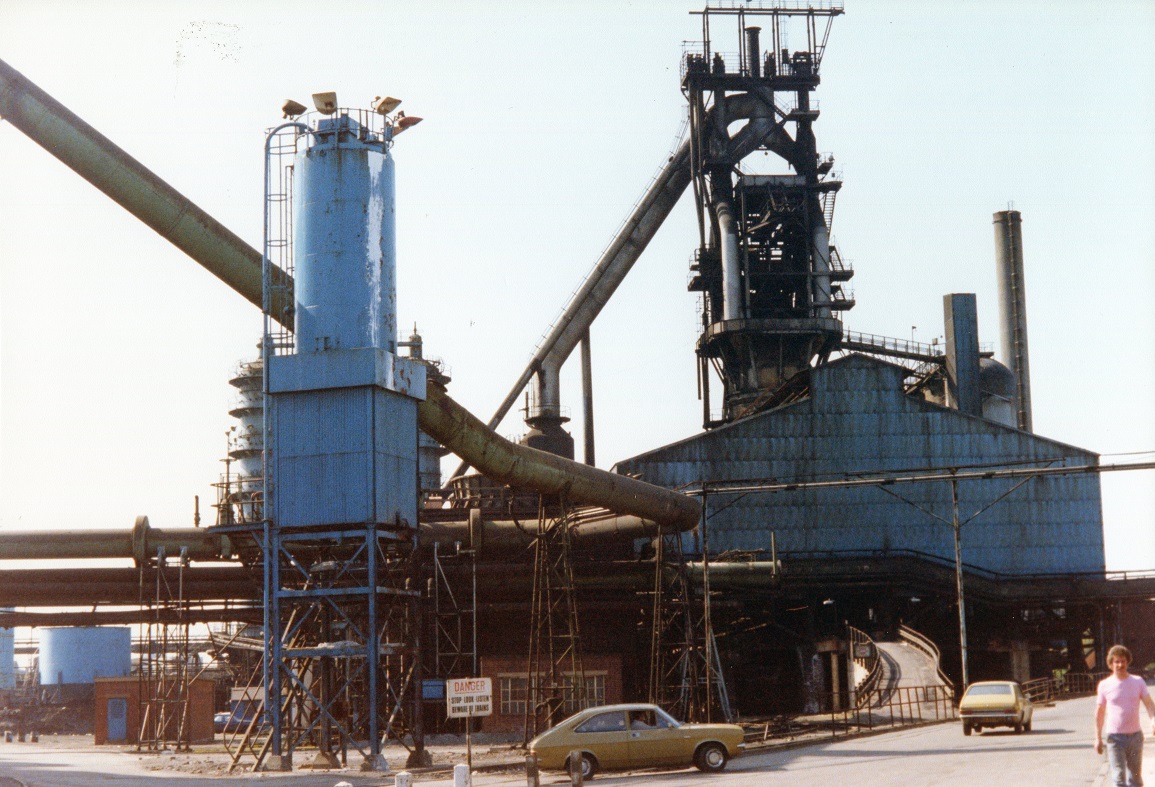 A summer’s day photograph deserving of a full size ‘splash’ showing the gas main on the left which ran to the gas holder. The main service ramp into the cast house is visible with the glassed in ‘No Entry’ sign on the left which flashed when casting. Note also the two seemingly identical Morris Marinas ! (NOTE: If you expand by clicking on the image, use the ‘back’ arrow to return to the page.)
Casting !

These images are from the film ‘The Last Sentinel’ and are not of great quality however they do convey an impression and atmosphere of the furnace casting. The only element missing here is the smell of hot molten iron and especially that of the strong sulphurous fumes given off from the slag… 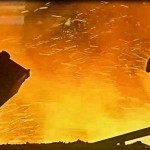 This image captures the ‘firework display’ of casting.

The iron flows freely from the tap-hole out of sight to the bottom left. Directly in front of the camera is the clay gun apparatus which is swung out of the way, ready to rotate and remotely plug the tap-hole once the cast has concluded.

This clearly shows the maze of sand runners and weirs required to direct and control the flow of iron to the train of ladles out of sight below the cast house deck level. 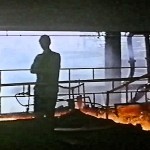 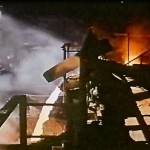 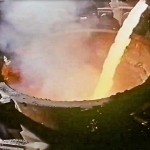 …into one of the slag pots forming part of the train waiting below. 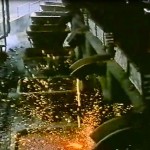 Here is the full train of ‘pots’ one is full, the rest await…

Molten iron, better known as ‘hot metal’ within the works, pours into a ladle from the left side of the cast house, facing the taphole. Molten iron could easily be distinguished from slag by the dancing, feathery sparks which can be clearly seen here.