A selection of images of the melting shop. Click and use the arrow keys to interact with the images. 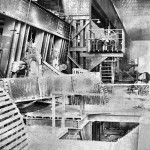 A very interesting undated image from a glass negative held at the Wolverhampton Archives. Clearly one of the older, tilting furnaces, the launder (or spout) in the right foreground would tilt forward and downwards through the cut-out on the furnace landing in order to cast into a ladle positioned below. 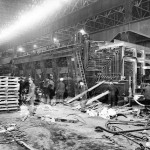 Taken in 1966, this is possibly ‘H’ furnace being built by contractors, Wellman Incadescent Furnace Co. 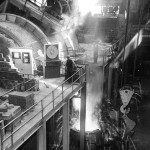 A few of the original transparencies from the Stewarts & Lloyds brochure (see ‘Brochures’) are preserved and this is one of the mixers, probably taken in 1965/66. 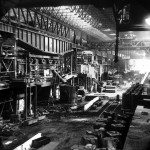 A very cluttered looking view of the Melting shop looking north with ‘B’ furnace on the left and the newly installed de-gassing plant just beyond. Again circa 1965/66. 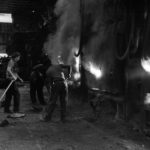 A good image of ‘H’ Furnace with flames jetting through the peep holes while workers appear to be clearing up excess ‘sand’ (used for fettling the hearth in between casts) from the rails directly in front of the doors. The rails are used by the scrap charging machines. 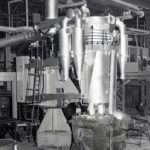 A very nice publicity shot of a pristine new Ruhrstahl-Heraeus de-gasser about to start work in 1965. Note that the ladle is actually resting in a pit with only the top two-thirds visible. It is supported by flat steel flanges below the studs for the overhead crane hooks. 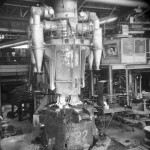 Another original image from the S&L brochure of the new de-gasser still looking fresh. Ladle 22’s next stop ! 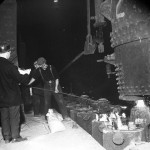 Ladle 22 is now being teemed into ingots. Bilston operated the ‘trumpet teeming’ process where the molten steel was teemed (poured) into a tube leading to a four-way manifold beneath the ingot moulds which evenly filled four ingots at once from the bottom up. 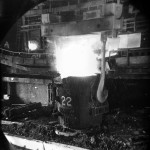 Furnace casting and we will follow the progress of ladle 22… 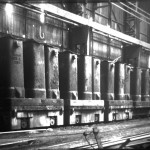 A train of ingot moulds in position for teeming. 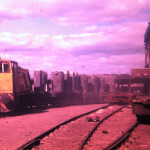 Rare colour picture of one of Bilston’s ubiquitous yellow shunters with ingot moulds in tow. 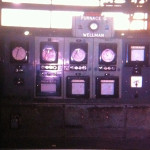 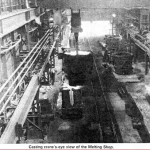 From a ‘Steel News’ article about the rigours of the crane drivers job in handling the ladles from their lofty positions. 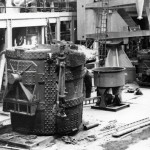 Portrait of a Ladle

A very new looking ladle next to a very new and clean looking degasser. 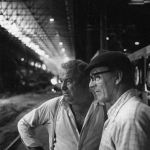 Jim Latham on the Furnace Landing 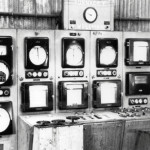 Compare with ‘G’ above – very similar of course. The buttons which controlled raising and lowering the three charging doors can be seen just to the right of the raised hand-wheel on the left. The hand-wheel just obscures the third door’s buttons (one to raise and one to lower). Instrumentation was by KENT control systems. 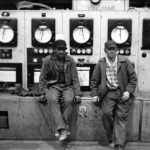 Possibly one of the series of photographs taken by Nick Hedges in 1977, unfortunately the men are unidentified. The long lever on the lower far right controlled which of the two ‘guns’ were firing, alternating every few hours to utilise the heat retained within the firebrick regenerating’chequers’. 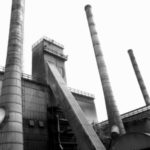 A view of the lime receiving stage and loading tower at the back of the melting shop. The chimneys are those of ‘C’, ‘D’ and ‘E’ furnaces from left to right.