NOTE : when you have clicked on an image it can be further enlarged for ease of reading by clicking again on the arrow box at the bottom r/h corner. To close the image simply click on it again. 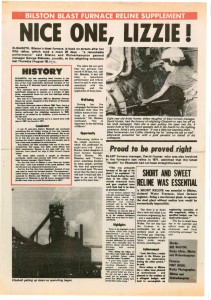 A nice picture of David Hunter’s daughter Anita putting the lighted torch into the tuyere port illustrates the top right corner whilst the rest of the page covers the history of Elisabeth and details of how the reline was accomplished. (Note – this is a colour scan of the page to show the red highlights hence its yellow appearance (age!). The rest of the pages are from straight black and white scans.) 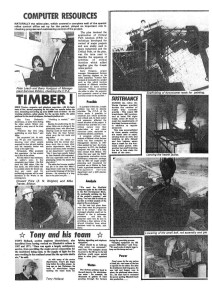 More interesting details on the work carried out including computer planning, the quantity of wood needed to erect internal working platforms, external scaffolding and electrical issues. 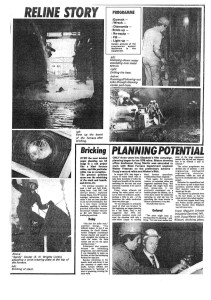 The bricklaying aspects of the reline are covered here along with pictures showing the cascade of water from the damp down phase, the wrecking of the lining and an interesting picture looking up through the centre of a freshly relined furnace. 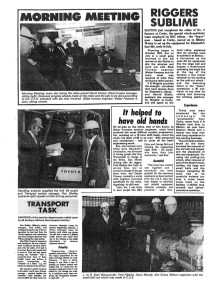 Atmospheric photo of a planning meeting including David Hunter and Walter Freeman plus descriptions of the roles played by key members of the team such as the riggers and individuals including Ken Evans and Ron Shelley. 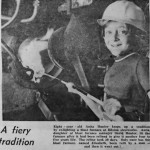 Not actually from the BSC newspaper but the local Express & Star reporting on the re-lighting, 19th August 1976.