A number of images in this website have been contributed by local resident Daren Kinsey who lived opposite the works on Millfield Rd. As mentioned under Acknowledgements many of these photographs had been consigned to a skip during the clearance of the works after closure which Daren managed to salvage. Daren also took some of his own photographs from his bedroom window as shown below. 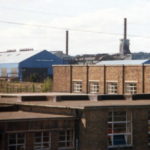 A view taken in 1979 zoomed in on the Central Engineering Shop looking over the top of the Sports and Social Centre.

A view of the Social Centre with the works and of course Elisabeth looming over the skyline. The entrance to the club is next to the pale blue Mk.I Cortina. Photo taken at the same time as the previous one, 1979. This view is looking towards the south with the truck on the Millfields Rd in front of the camera heading east towards Bilston town centre.

Zoom in on Elisabeth

A telephoto shot of the blast furnace from the same position as the previous picture, looking over the roof of the Social and Training Centre buildings.

Another view taken from a downstairs window on a different date with a different selection of cars on view including a Toyota Celica Mk.I on the near left.

Sadly those clouds eventually brought the end of the Social Centre as Daren’s most recent picture shows. Apparently the land is worth more for housing redevelopment and so another piece of Bilston Works history disappears.