A selection of my own photographs of the melting shop taken in December 1972. Click and use the arrow keys to interact with the images.

From the Landing Next to G Furnace

Here is one of my favourite pictures of the melting shop taken from the top of the steps to the landing at the north entrance, next to G furnace, I can almost hear the ‘singing’ of its steam and oil atomiser flame gun… …Light and shadow, heat and dust…
The sun’s rays pierce the gloom as we look along a ragged line of ladles whilst a flame plays at the tap hole. On the left side are the teeming bays where an ingot train of recently cast ingots can be seen… 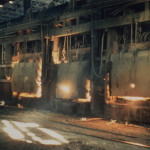 ‘F’ furnace was the last in the row sitting right at the south end of the melting shop and similar to ‘G’ and ‘H’ furnace with 120 tonnes capacity. It only seems like yesterday when I was standing there hearing that roar and seeing the bright flames peeping from behind those heavy water-cooled doors…. 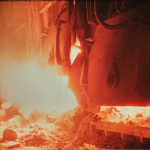 This was one of the oldest furnaces with 110 tonnes capacity which I believe originally tilted forwards to cast. The doors were smaller than the newer ones and had four rather than three. I asked the furnaceman to partially raise one of them and the effect was pretty spectacular…

Another picture which came out better than expected. This looks like ‘B’ furnace being charged with hot metal (molten iron) transferred from the mixer by ladle and overhead crane. A special trough is placed directly in front of one of the doors and the ladle simply tipped its contents accordingly. The two operatives looking on are probably not as close as they look but close enough! 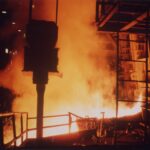 Seeing a furnace cast was always a thrill. Workers would drill out the clay stopper at the front of the furnace where there was a runner or launder under which an empty ladle had been placed. To remove the ‘skin’ of steel directly in front of the taphole an oxygen lance would be employed. Suddenly the faces would brighten as a river of steel was released along with clouds of red smoke running along the launder and into the ladle…

Showers of sparks spray out as the incandescent steel drops several feet and splashes into the ladle during the early stages of casting.

Another example of under-exposure where the jet of bright liquid steel has fooled the light meter – and me ! This is ‘trumpet’ teeming – a system of pipes connecting four ingots at one time fed from below via the single ‘trumpet’. The handle controlling the ladle’s stopper rod can be seen held on the right..

The Last Stages of Casting

The ladle is filled and the slag has run from the lip and allowed to fall into the slag pit with just a dribble remaining. This is ‘E’ furnace and I remember walking quickly (you never ran) down the length of the melting shop to be in time to capture a picture. This was the picture that caught Brian Henry’s imagination (see ARTWORK).

One of two pictures taken of scrap being charged into a furnace. The charging machine ran on rails parallel to the furnace. A series of pre-filled scrap boxes would be lined up opposite and the swivelling arm would pick up, swing around and once the furnace door was opened by the furnaceman the box would pass inside and empty its contents by rotating 180 degrees. 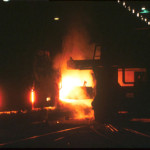 Another view of the charging machine at work. Again, the bright light of the furnace caused under exposure of the shot – on the other hand the scrap box going in can be clearly seen.