A selection of clear aerial views showing some very good detail. They are undated but where possible an idea of when the photographs may have been taken is indicated. 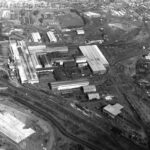 A very good view of the works. The Millfields Road runs west to east, from left to right, at the top of the picture with the ‘Tarmac’ road bridge over the canal clearly visible at the top left. The electrified main railway line can be seen at lower left to right with a diesel hauled train of coke wagons approaching the south end of the melting shop. Probably dating from late 1960’s. See next image for a ‘zoomed in’ section… 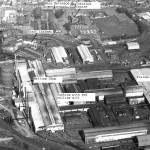 A close up from the preceding photograph with labels showing various locations – including the now famous blast furnace office! My home for twelve months in 1973-74. It looks as if the works must have been on shutdown since none of the melting shop’s chimneys are trailing their usual ‘banners’ of red smoke. 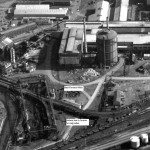 A zoom-in of the rectangular ore stockyard (and BF Office!) directly below with a good view of Elisabeth and the back of the melting shop – see ‘Looking East’ for the full picture. 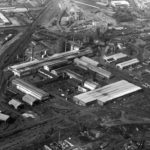 A superb shot, again from the same roll of film as the others, giving a great overall view of the works and surrounds.

Now we have come almost full circle, looking east-south-east with the edge of Bilston town and Moxley on the top left, Coseley and Bradley top right. Thank you Daren K !

A dramatic shot looking south-east with at least five of the open hearth furnaces operating. Elisabeth looks to have received some new paintwork and the mixing bay roof of the melting shop also looks fresh; possibly taken in late 1967. A great picture. 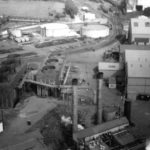 A very clear picture. The white building just visible in the left foreground is the staff and management canteen adjacent to cooling towers with the Mechanical and Engineering Stores to the right. Water storage tanks are at the top with the so-called ‘Polish Camp’ hostel huts visible at the top left next to the sports grounds.

From Elisabeth looking East I

Now we are looking in a more easterly direction with the windows of the Chemical Laboratory in the immediate foreground. The Ladle Repair Shop is to the right with the long North Casting Bay building running behind. The large building beyond is the Finishing End while the east side of Bilston is in the distance. Given the elevation and composition, this photograph was probably taken from the very top of Elisabeth and using a zoom lens. Compare to the next, colour picture. 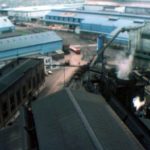 This was taken from the main top landing or ‘bell deck’ of Elisabeth looking over the cast house roof in the same direction but without any zoom, taking in more of the foreground surroundings whilst the buildings in the previous picture are in the background. The long brown building with open windows on the lower left is the ‘Blower House’ which supplied the blast to Elisabeth. 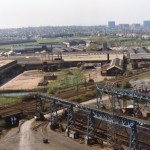 A good view taking in part of the iron ore stockyard with the railway line for slag ladles to Tarmac curving past to the right crossing the new bridge over the canal adjacent to the BR main line (See also: Gallery/Works Locomotives). Note that all the buildings in view beyond the railway line and on the other side of the canal were not part of the steelworks.

A good view of Elisabeth and the cast house taken from the gas holder. The three gas scrubbing towers are in the foreground. Date unknown but most likely mid 1970’s. 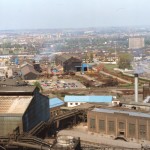 Another shot from the same location. Visible above the cast house is the general office, the staff canteen is the white building where three windows can be seen with a long blue roof. The blower house is the long brown building in the foreground. To the middle right can be see the main entrance (in the smoke from two silver chimneys) with the blue panelled training centre at the far right. The area in the middle of the picture featuring a large black shed with yellow and red cranes and an extensive stockyard of semi-fabricated steel structures and sections belonged to a separate BSC engineering company ‘next door’, E.N. Wright.

The Engineering Stores is in the immediate foreground and Engineering Workshop is just behind the brown brick building. The big blue shed behind the workshop housed the Lindemann swarf crushing machine and the rather shabby brown streaked shed with ramp is the pig casting machine. This was used to produce ‘pig iron’ – hence the name – and was a long continuous conveyer of moulds into which molten iron from Elisabeth would be poured forming a ‘pig’ (bar) of iron. The continuous chain of moulds travelled through jets of water towards the far end where the iron would have cooled and solidified enough for the moulds to overturn where the ‘pig’ would drop into a pile and the empty moulds returned. The machine was used when the melting shop was shutdown or if other works within BSC required pig iron for their operations. Note the blast furnace bells and hopper in the bottom right foreground. 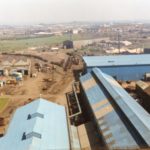 Overlooking he roof of the rolling mill. For a closer view and more information on the buildings in the left-hand side background see the final image in this section.

From the top of the gasholder is a view of five of the open hearth furnace chimneys. The dark ‘banding’ discolouration, a feature of these chimneys which developed over time, is clearly visible on four of them. These last six and the next, seventh, colour photographs appear to have been taken together. The melting shop is clearly not operating given the lack of smoke from the chimneys and whilst it is possible the photographs were taken after closure, most likely it was during a summer shutdown, mid seventies. Evidence for this is: (a) cars in the General Office car park and (b) smoke from the blower house chimneys showing that all has not ceased (see previous image ‘Elisabeth, Staff Canteen and Blower House’). 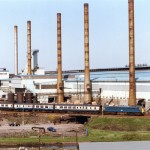 A London Euston bound express passes the south end of the melting shop and appears to have been taken at the same time as the previous six colour images in this section given that the chimneys are similar in appearance and devoid of any smoke. The difference being that this shot was clearly taken well away from the gas holder and also off works property, being from the other side of the dividing railway line and canal. For car spotters again, visible in the foreground left to right, a Vauxhall Viva (Mark III), Hillman Avenger and Ford Escort. 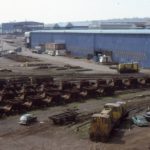 An excellent photograph and whilst not strictly speaking an ‘aerial picture’it is nevertheless an elevated view. The wall of the Finishing End runs along the right whilst in the far distance can be seen Number 1 scrap yard. The two blue apex roofs to the right are No’s 2 & 3 scrapyards followed by the more weather worn roof of the Mould Preparation Shop (sign not quite discernable). Lines of stored slag ladles can be clearly seen in the foreground. The cars appear to be an Austin/Morris 1100 having just crossed the tracks, whilst parked on the right is another 1100 (with vinyl roof) and a Ford Corsair.

(Caption courtesy of loco Fitter Roger Deans) In the foreground are the fire, ambulance and works police offices. The facing right side was the office of Walter Ricketts, Chief of police. To the left was the break room for the police/ambulance/firemen. Behind is the garage for the fire engine and ambulance. The blue shed with the door open was the drivers cabin (and break time ‘casino’). This was for mobile plant drivers only – not loco drivers or shunters.

Larger background buildings, L to R : this was known as the ‘brick shed’and for the majority of the time it was empty and used as winter storage for mobile equipment. When major work was being carried out on the blast furnace it was used as a brick store for the refractories. To the right of that, the building was split in two, facing was the stores for loco tyres and other larger loco and mobile spares. Behind that was the mobile repairs (not locos). To the right of that section with the two sliding doors is the Loco Repair Shop. The first door was to the electrical dept with access through that to the main loco workshop. To the right is the main entrance to the main workshop and pits. At the far end of this was the service bay (previously the steam crane dept).

The buildings to the right were the platelayers cabin, and behind that their office. The top floor was the radio control room, the lower was a break room for loco drivers and shunters.” The large corrugated, streaked and derelict looking shed in the left hand background is that of the Pig Casting Machine.