Elisabeth was relined six times in her lifetime, the periods in between were called ‘campaigns’. A ceremony was always held to mark the occasion of being re-lit and the commencement of a new campaign. These were as follows:

See below various documents and images, the first being the 1971 ceremonial leaflet prepared by Elisabeth Saul, parts of which are reproduced here. All the images after the 1971 pamphlet are of the 1976 reline. The colour images are taken from a film made covering the 1976 reline called “The Last Sentinel”. Since these images come from a film the resolution is poor and the pictures are not really suitable for the extra expansion option. At the end there are some better quality photographs of Anita Hunter performing the relighting. 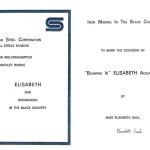 Cover of Pamphlet and inside page issued for the relighting ceremony in August 1971. Elisabeth Saul was the daughter of then General Manager Derek Saul (see Steel News 1970-1972).

Extract from the leaflet showing with a photograph of the first lighting – and an interesting moral tale of what happens if not lit by a female ! 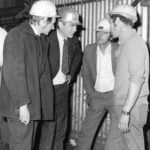 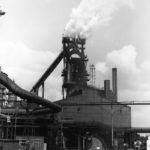 Dramatic picture of Elisabeth under full blow-down procedure (see also’Relining Elisabeth Supplement’ under ‘Steel News’). Looking like an ocean liner under full power, quenching steam is being blasted through Elisabeth and ejected out of the top valve system in billowing white banners. This is also a good view of the central access ramp into the cast-house with iron ladle train bay to the left and slag bay to the right.

The enormous hopper which houses the double-bell charging system is lifted up to the top for installation (compare to ‘Images of Elisabeth’ showing the original lifting of the hopper). 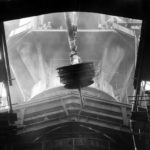 An excellent sharp photograph of the bell rod assembly being carefully lifted skywards. The expansion option here works well and a spectators gallery can be clearly seen watching the progress! See further down this page for a colour shot looking down. 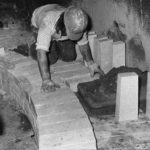 This must have been back breaking hard work – three layers of firebrick to be laid in what looks most likely to be the upper hearth area. 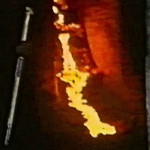 By the end of a campaign the hearth is worn below the taphole and a pool of iron forms (known as ‘the bear’ or ‘salamander’) which can only be be removed by drilling another ‘taphole’ into the furnace. This is done beneath the cast house floor. Here we see the first trickle of iron which will be formed into ‘pigs’ for breaking up and removal.p> 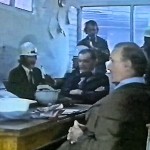 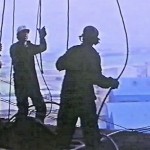 Preparations at the Furnace Top

A team of riggers from E.N. Wright, Corby, work on the main upper deck of Elisabeth. 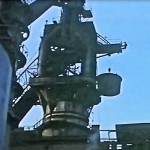 Lifting the Hopper I

The new hopper to house the double bell charging system is hoisted up to upper platform level. 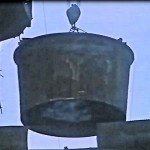 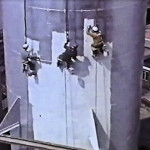 Not for the faint-hearted ! 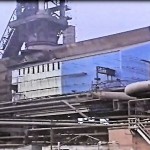 A fresh coat of blue paint is applied… 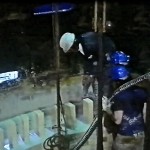 The new refractory lining is underway… 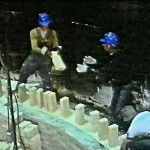 Made to look easy as the bricks are tossed between bricklayers. 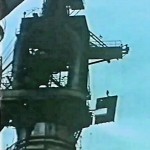 A large plate for the upper part of the furnace is lifted into position.

Sleeping on the Job

The bell assembly is lifted up from the cast-house floor and through the roof. 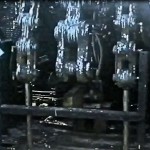 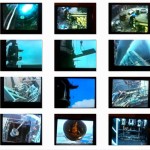 Some further views from the film… 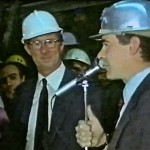 Ladies watch – but who are they? Anyone who knows is kindly requested to advise using the ‘Contact’ page.

Any names of these watchers, again, please advise..! 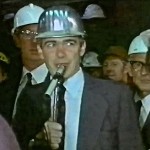 David Hunter addresses those assembled around the furnace prior to relighting. 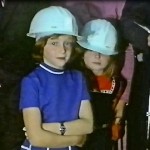 “Now just be careful where you put that flame” !

Preparing to bring Elisabeth back to life… 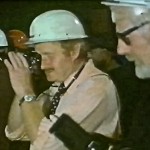 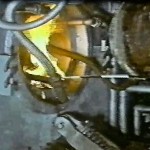 The blazing taper is inserted into the tuyere port… 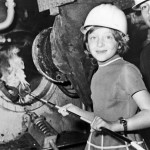 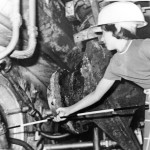 The Moment of Truth

Anita leans into the furnace… 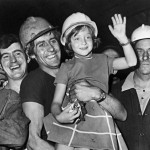 Lovely picture of furnaceman Joe Collier hoisting a happy and smiling Anita aloft in celebration, the packaging containing a gold pendant gift clutched in one hand.