The below advertisements are from a 1965 issue of a trade magazine called ‘Steel Times’. 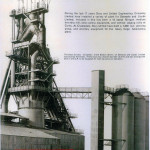 Such a good image of blast furnace I make no apology for showing it twice on this page. Davy-Ashmore were clearly still proud enough of Elisabeth that they used her in advertising over ten years after she was built.

Advertisement by the company who installed the bar mills at Wolverhampton and Birchley Works in the Steel Times supplement of 1965. 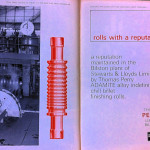 Another advertisement from the Steel Times supplement of 1965.