Steel News was BSC’s own weekly newspaper and free to all employees. It was published ‘by division’ and featured works within that division. Bilston was part of the Special Steels Division headquartered in Sheffield so much of the newspaper covered steelworks in Sheffield, Rotherham, Wrexham (Brymbo) and Pontypool (Panteg) as well as Bilston. This meant that only individual articles on Bilston would appear scattered throughout the paper therefore these sections tend not to be full page reproductions unlike BWB and Steelworks News which were dedicated in full to Bilston, Wolverhampton and Birchley works. 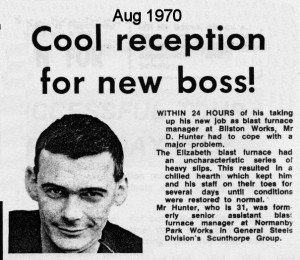 This was Elisabeth’s way of welcoming new manager David Hunter on his arrival! 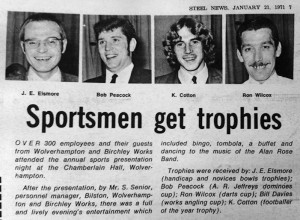 I knew John Elsmore when in Sales at Wolverhampton Works. John was the Production Controller and the man I relied on when customers chased their orders. He also had a very nice red Ford Capri GTXL (Mk. IA).

Report on prizes given to apprentices and trainees along with a keynote speech on export markets by the then General Manager Derek Saul. 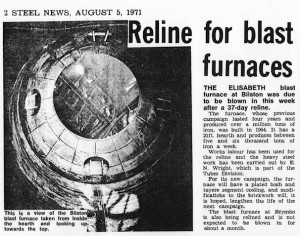 Interesting picture taken looking up inside Elisabeth. The four ports for the gas offtakes are clearly visible. The entire charging system and hopper has been removed and although there is a lot of equipment above we are actually looking up into open air – note the sun’s shadow towards the bottom of the picture. 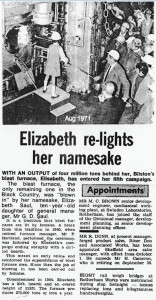 Wonderful picture of then General Manager Derek Saul’s daughter Elisabeth (incorrectly spelled with a ‘z’ – see under Gallery/Relining Elisabeth) bravely lighting Elisabeth to commence the fifth campaign. Helping hold the torch is Cyril (‘Sid’) Beesley; David Hunter has his back to the camera, smoking a pipe and wearing his distinctive metal safety helmet. 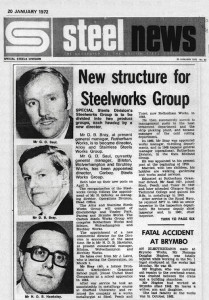 Cartoon from March 1972 when Britain suffered power cuts during a miners strike.

Peter Allen presenting an award to Ted Hallwood of C.E.S. in June 1972. 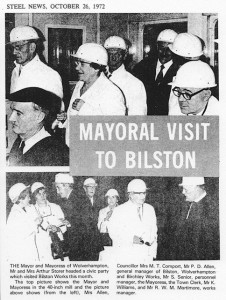 Bilston works was always on the list of key workplaces for civic visitations.

New overhead cranes installed for the soaking pits in the rolling mill.