The two main basic hot processes at Bilston were ironmaking and steelmaking. For those unfamiliar with how this was done I have shown two diagrams below.

Worldwide, Ironmaking today is still very much carried out using the blast furnace – this has not fundamentally altered and the simple diagram down below (left) will show how Elisabeth worked. For a detailed cross-section engineering drawing of Elisabeth herself click on the ‘Documents’ tab.

Simply put, raw materials were ‘tipped in’ at the top, combustion applied in the middle generating a series of chemical reactions resulting in molten iron and waste slag being tapped out of the bottom. It was a continuous, 24 hour process called ‘reduction’. The correct term for this process of reducing iron (or any metal for that matter) from ore is ‘smelting’

The raw materials charged to the blast furnace such as iron ore, limestone, and mill scale were collectively known as the ‘Burden’ whilst the fuel – coke – was accounted for separately.

Unlike ironmaking, steelmaking has changed and Open Heath steelmaking, which was once extensively used no longer exists in Britain. The process at Bilston was prefixed as ‘Basic’ which referred to the lining of the furnace which could be either ‘Basic’ or ‘Acid’ depending on the type of iron being processed. Typically Acid linings were only used in the northwest.

Open Hearth steelmaking was phased out in the 1970’s resulting in the closure of several works, unfortunately including Bilston, and were replaced by a small number of very large, modern steelworks, typically on coastal locations for ease of handling the huge volumes of imported iron ore. These new plants employed a much faster and new process invented at the Linz-Donawitz works in Austria called L-D or Basic Oxygen Conversion which could transform 300 tonnes of iron to steel in twenty minutes compared to eight to ten hours in the Open Hearth furnace.

Other steelworks were built, mainly in the Sheffield/Rotherham area, using another process known as Electric Arc which was more suited to scrap feed without hot metal (molten iron) and the production of engineering steels. It was the use of the older Open Hearth process at Bilston which unfortunately added to the argument in favour of closing the works. 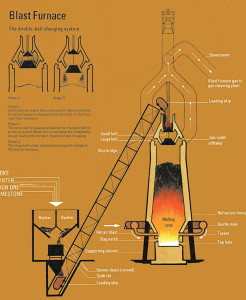 Diagram of a Blast Furnace

This clearly shows the working of a blast furnace and the principles of how the raw materials go in at the top and iron comes out at the bottom. You can see here the configuration of Elisabeth. Note the raw materials are : coke, sinter, iron ore and limestone. Sinter (an agglomeration of fines and fragments) was not charged since there was no sinter line facility at Bilston – however a product called millscale was. Millscale is a flake of metal from the ‘skin’ formed on ingots in the soaking pits and broken off when passing through the primary rolling mill. Millscale is of course iron rich and therefore good to be recycled back into the blast furnace. Care had to be taken in that being brittle it disintegrated into ‘fines’ and could clog the blast furnace if charged in large quantities. 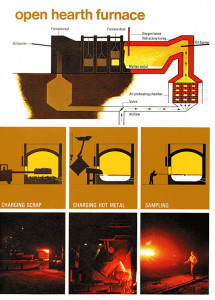 Diagram of an Open Hearth Furnace

Bilston’s furnaces were just as this except there was no roof mounted oxygen lance installation.